Another Installment of Monolith II.

I thought that I would expand on the Monolith II since it was featured in the I Dream of Wires documentary. 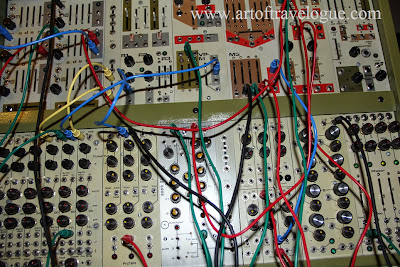 The Monolith II is a synthesizer of unknown origin that I bought in non-working condition.  I spent some time restoring what I could out of it.  I still would love to restore the rest of it (which includes a copper touch plate keyboard with moving keys, velocity, aftertouch, surface area, etc).  But it is a much lower priority since I got the Archangel Sequencer/Keyboard from Detachment 3 http://artoftravelogue.blogspot.com/2013/04/here-is-video-that-i-posted-of.html
I originally had written a post about the Monolith II here:  http://artoftravelogue.blogspot.com/2012/08/monolith-modular-synthesizer.html
This synthesizer features 6 VCOs, 4 of which can be switched into low frequency but only offer sine and rectangle waves, the other 2 are audio frequency only and also offer a saw wave.  In addition to this, there are 5 LFO's with sine and square outputs, another sine LFO with a 90 degree shifted output (so you could make a quadrature LFO with these 2 outputs and inverted outputs), 3 lowpass/bandpass filters with a nice overdrive control, 1 lowpass filter with multiple pole outputs (2, 3, and 4), and one multimode filter (LP, BP, HP, but no notch mode) with both 2 and 4 pole outputs. There are also 2 comparators, 3 smoothed random generators, 1 sample and hold, 6 envelopes (2 of which do not work), 2 voltage controlled envelopes (1 of which does not work), 6 VCA's that can also act as nonresonant filters with a switch (1 of which does not work), 4 "phasors" (stereo input and output with 1 phaser going from L to L, one from L to R, one from R to L, and one from R to R), 2 awesome ring modulators, 4 additional VCA (without controls, just input/CV/output jacks), several mixers - some for audio and some for CV, and an external input with a built in microphone complete with level, compressor, envelope follower, and gate extractor.
In my studio, I always have this synthesizer on and often use modules from it to compliment other modular synths around the studio.  There is rarely a patch that I make in my studio that doesn't use the Monolith II to some extent. 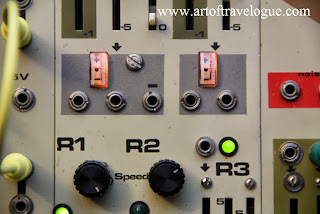 Posted by Jon Sonnenberg at 1:57 PM