My Studio, Ka-Boom, Over the Years part 3

I scanned in some more pictures of the studio.  This will fill in some of the missing years from parts 1 and 2.  If you wish to view the other posts, they are all under the label ka-boom. 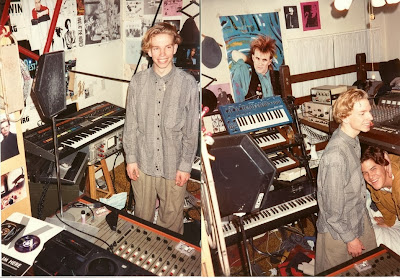 -- 1991 --
This first picture (above) would have been from 1990 or 1991.  I was working with my friend Brandon (who peeked his head into the photo on the right) on some songs.  We recorded several things but never released anything.  Brandon simultaneously started singing for Optic Rain, a band that I recorded, produced, performed with, and later would cover one of their songs for the first House of Wires record.  On the wall, there are posters and pictures of Howard Jones, Ian Curtis, The Damned, Mad at the world, Nitzer Ebb, etc, etc.  The large mixer in front of me was in front of the door - the photographer that took this photo (probably my brother) would have been standing in the door because you had to crawl under the mixer or through the bottom bunk bed (where Brandon is) to even get into the space.  What a mess. 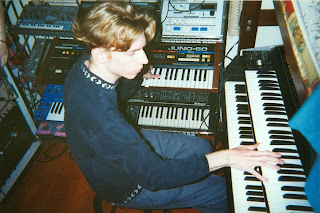 -- 1994 --
This photo would have been around 1994.  I remember this year because I had moved bedrooms and reorganized everything - which is why nothing is on the floor (yet).  The stand that the Juno-60 is on was a grocery store candy rack that I hack sawed every other shelf off so the equipment would fit.  it worked really well and could squeeze up against the wall, allowing me a lot more room to move. 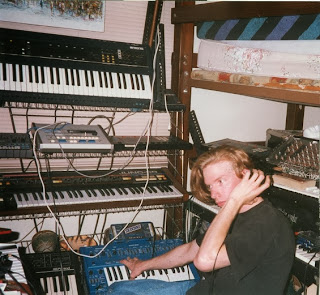 -- 1996 --
The photo on the right shows a later incarnation of the same space, where the grocery rack is still on the same wall, but has a different arrangement of equipment on it.  The bunk bed was always a part of my room and bedroom studio but by this stage, I had removed the lower bed and just slept up top.
-- 1998 --
Below is another picture of the studio during the time when I recorded the House of Wires album 'Monogamy'.  The Aries modular was borrowed from my friend Cyrus.  The Aries, Kawai K5 and Akai S20 sampler, were all big parts of that record.  When we mixed down, some of the tracks were on the Tascam 388 mixer and some were on the Mackie 1604 because we used 3 ADATS (24 channels - the Tascam was only 8 channel and the Mackie was 16.  The Tascam has more to offer in terms of EQ where the Mackie was great for 6 effects loops, so every song was rewired depending on how we wanted to process the tracks). 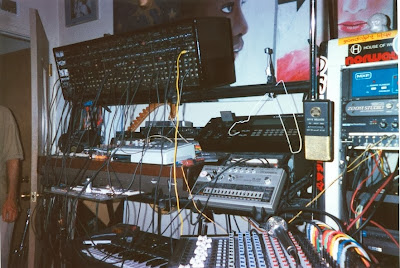 Posted by Jon Sonnenberg at 4:08 AM