This is partly a reply to Walter Ego's comment in my post MC-202, Master Clock, Electronic Music Studio Wiring Diagram, but also just my opinion on the MSQ-700.
The MSQ-700 was an early sequencer made by Roland, which was primarily designed as a MIDI sequencer, but it also has DCB (which was a pre-MIDI implementation that the JUNO-6, JUNO-60, and JUPITER-8 have... I don't believe that there are other synthesizers that used this format).  The only problem with this (and it justifies the need for 2 of them) is that there is a switch to make them EITHER MIDI or DCB, but not both at the same time. 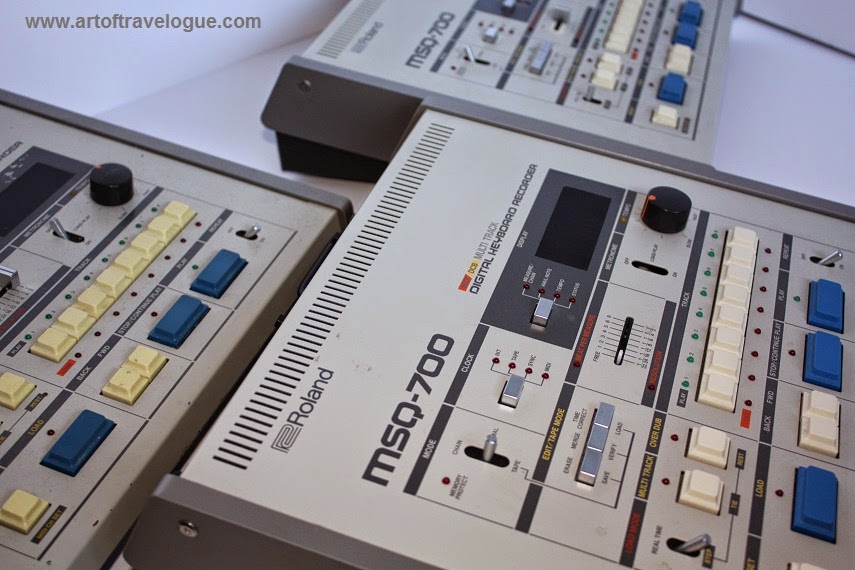 The MSQ-700 also offers DIN Sync IN and OUT!  This means that you can easily daisy chain as many of these together and they will all stay in perfect sync and start at the same time, etc.  I use 2 of these in my studio and have a 3rd non-working one for parts if either of these break on me.  One of these is always in DCB mode, usually connected to the Jupiter-8, but sometimes connected to the Juno-60.  The other one is always in MIDI mode, but these days, I usually don't do a lot of MIDI sequencing.


The actual sequencer in the MSQ is good, but leaves a lot to be desired.  First off, only 8 patterns can be stored in the internal memory.  This is fairly limited if you want to store many different patterns in it.  It is not so bad if you just use it to make small, repetitive patterns or sets of patterns on the fly.  In both of my units, the internal battery is dead or removed so that it does not retain memory if you turn off the power.  I am fine with this because I use new patterns every time I use it anyway. 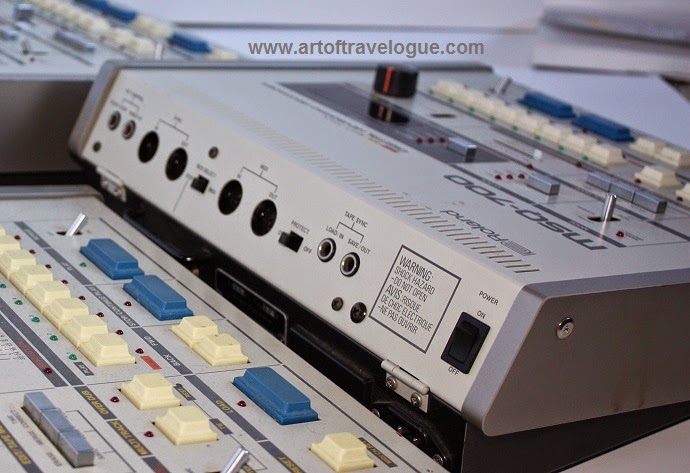 There is a song or chain mode where you can add any of the patterns together in any order, which is nice.  For instance, if you want it to play pattern 1 five times, then pattern 6 twice, then repeat this - it is very easily done.  There is also a "multi-track" function that allows you to play any of the patterns at the same time.  These can then be joined/merged into a single pattern.  It makes a lot of sense to me, coming from the world of 8-track reel to reel recording.  When I used tape machines, you had to choose what to record in what order, then you could mix and merge tracks to dump them to a single or stereo pair of tracks.  This, of course, takes away any editing capability of the single tracks once they are merged so you have to be sure that it is exactly what you want before the merge.
One thing that I really love about this sequencer is that you aren't confined to typical measures of 4/4 or 3/4 tempos.  Much like other Roland sequencers (TB-303, SH-101, CSQ-600, etc, etc), you can make the pattern as long as you want, say 7 quarter notes for instance, and it will repeat those in perfect time when synched to another source.  This is great for strange syncopation - having one pattern recorded where it repeats every 9 steps and another where it repeats every 10.  It gives some great movement to otherwise really repetitive, stagnant patterns.
Though I own 3 (including the broken one), I never had them all working at once.  I actually bought the 3rd one when one of mine bit the dust and went haywire.  This was mostly due to having the internal battery die and leak over the circuit board.  I have since cleaned it up and use it for parts.  I like having at least 2 working ones so I can sequence MIDI and DCB at the same time if I need to.
One last note about the MIDI/DCB thing.  There are actually 3 different versions of the DCB cable.  Two of these have the typical DCB connector on both ends where the difference is one cable is bidirectional and the other only works in one direction.  The one direction cable was really used to connect two Juno-60's together, where one would play its own sound and the other would play both sounds. If you use the single directional cable with the MSQ sequencer, you have to reverse it when you load in sequences via the keyboard, then reverse it again when you play it back.  Another way around this is to use a MIDI controller, enter the notes in MIDI mode, switch it to DCB, and play the sequence back on the DCB device.  Robert Gutschow (other member of Pivot Clowj and House of Wires) is also a fan of the MSQ-700 and also has 2 or 3 of them, but has my old single directional cable.
The other type of cable was only used with early versions of the Jupiter-8 which has the connector on one end and a 0.100"-on-center pin receptacle on the other end.  For years, I didn't think that my Jupiter-8 had DCB and believed it to be an early version before they added DCB.  Then one day, I was at John St James' studio and he had his Jupiter-8 connected to a MIDI to DCB device.  I noticed that his cable was going into the Jupiter-8 without a DCB connector on the back, but through a small opening toward the bottom of the JP-8.  I went home and noticed that mine also had that opening and connector on it.  I went back to John's studio and used a multimeter to figure out the pin connections, made my own cable, and have been sequencing the JP-8 ever since.
Posted by Jon Sonnenberg at 8:54 AM