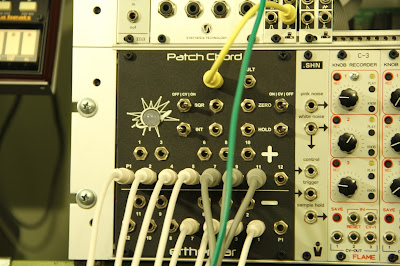 I have been wanting to write a post about this module ever since I bought one 3 years ago.  From the time I first saw one at my friend Ben Vehorn's studio, I couldn't imagine an electronic music studio without one.  For a while, I was waiting until I made a video to demonstrate its features, but I wanted to make the video after the software had been updated - which I finally did last November...  and then I got super busy with other things (as usual)... I will edit that video and post it when I find time.  in the meantime, here is a post about it...
Where to begin?  I think that this is one of the most important modules in the modern production of modular synthesizers.  It is one of the most underrated, most powerful modules available. In fact, I was not planning on buying into Eurorack, already having 4 formats (Modcan series B, Synthesizer.com, Aries, and Monolyth)… but this came along and brought me into the world of Eurorack.  If it weren’t for this module, I am not sure that I would think that Eurorack was even “necessary”.
So what does it do?  The Patch Chord takes in a waveform from an oscillator, analyzes is, and digitally makes a whole series of related waveforms available, each having their own separate output.  This module has two modes – each are equally useful – one is a chromatic mode, where each of the outputs gives you frequencies for the 12 half steps above and 12 half steps below the pitch/frequency of the input signal; the other mode gives you the first 12 harmonics available in the top 12 jacks, and some sub octave dividers in the lower 12 jacks.
Besides analyzing the pitch, the Patch Chord also can check the duty cycle of the waveform, and the waveforms of its outputs can change shape based on this duty cycle.  There are 3 waveforms available, selectable by a switch: sine, saw, and pulse.  If pulse is selected, the duty cycle will affect the pulse width.  If sine is selected, then the duty cycle will skew and squish the sine wave into an asymmetric waveform.  If saw is selected, then the duty cycle will morph between a triangle wave and a saw wave.
One application for this is to simply change your pulse wave into a waveform that can morph between triangle and saw. 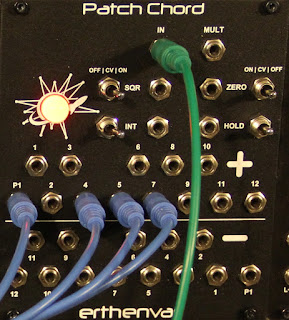 My favorite applications are
A)    Mixing the outputs into various VCA’s and making complex melodies (in chromatic mode) where the notes of the sequence fade in and out.
B)    Mixing the outputs of the harmonics into various VCA’s to control the harmonic content of a complex waveform.
In both of these applications, my Roland CPE-800 is an ideal controller to work with because you can “play” the levels manually using the faders or automatically using the recorded memory.   Other favorite controller/VCA’s is the 4MS VCA matrix coupled with a quadrature or octature LFO.

Posted by Jon Sonnenberg at 8:33 AM