My Studio, Ka-Boom, Over the Years part 2 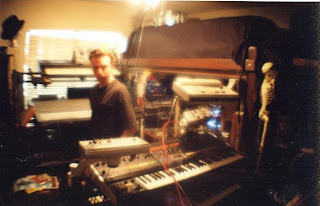 My friend Dan Michaels took this photo of me in my studio after I moved again.  I was back in a small, crowded room and slept on top of the bunk seen to the right of my head.  A Halloween skeleton and mannequin sit in the corner of the studio.  Behind Dan would have been the door and to the right of him would have been more synths and modular gear. 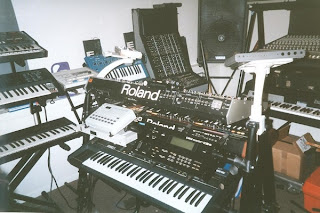 -- 2003 --
I moved from Fullerton, CA to Akron, OH in 2003 after I graduated from Cal Poly Pomona to continue a 2 year, long distance relationship.  I set up my studio in the bedroom of a small apartment and recorded 'Imaginary Hospitals' and 'The Winter EP' in this space.
There was one other apartment location that the studio was in before a house was bought and the studio moved into the house. 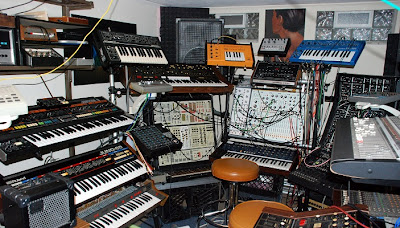 --2009 to present  --
There have been 2 different arrangements for the home studio.  The photo above shows the first.  Then in 2012, a flood came into the basement and everything had to be moved out.  It was really only about 3 inches of water, but it was enough to take everything out, redo the drywall, clean everything, and move it back in.  There are several earlier posts in this blog about the flood.  The photo below shows the current setup. 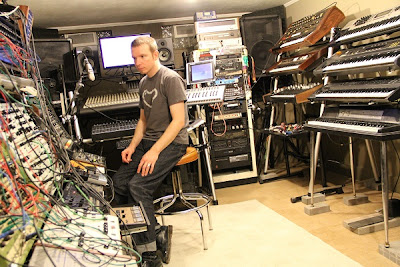 Posted by Jon Sonnenberg at 5:05 PM