My Studio, Ka-boom, Over the Years part 1

It takes time to develop a workable layout for a studio.  Many things have to be considered:  what equipment is used with what?  Will cables get in the way?  Where do things go that I don't use as often? - these and many others are all good questions to ask.  My studio is a work in progress.  It is constantly evolving and expanding.  Here are some glimpses of the studio over the last 25 years. 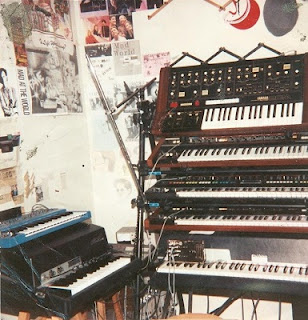 This is basically how I had my room when I was a senior in High School.  Many of the walls were covered with posters of various bands and things that I was into at the time.  At this time, I did not have any drum machines or tape machines to record.
On the keys of the Rhodes 73, you can see a little box that had a homemade multiple and an attenuator in it that I would use to sync the Juno and Jupiter arpeggios to the gate out of the SH-101. 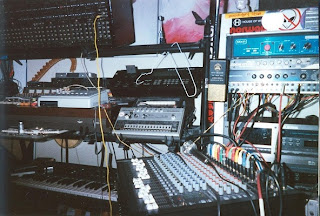 I know that there are a lot of years between 1990 and 1998 - I will scan and post pictures of those years at another time.  Most of the years in between were spent recording with the Tascam 388 reel to reel and making Pivot Clowj tracks.  This 1997 photo shows the studio around the time Robert Gutschow and I recorded the House of Wires 'Monogamy' album.  I did not have a mixing board large enough to support 3 synced ADAT machines, so some tracks were mixed to the Tascam 388 and some went to the Mackie 1604 mixer.  The Aries synth was on loan to me from my friend Cyrus.  I eventually bought it from him years later and now it once again resides at Ka-Boom. 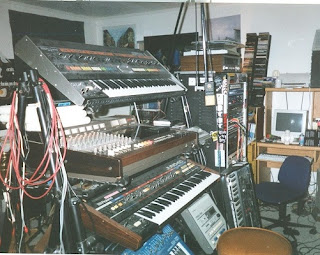 Right around the year 2001 or so, I moved to another house with some friends and had the master bedroom.  It was a large space and had tons of room to spread some things out.  The types of songs that were recorded in this space were the House of Wires 'Found Sessions'.  Toward the end of my stay in this house, I started putting a modular synth together which eventually led to the first Travelogue album 'The Art of Conversation'
Posted by Jon Sonnenberg at 10:11 PM