After posting on my favorite synth, the Yamaha CS-20M, I wanted to say a bit about the CS-40M, which I also own.  The 40M is an expanded version of the 20M and has many additional features that the 20M does not have. 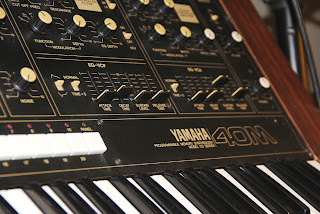 The CS-40M is almost identical to the CS-20M in design.  It has nearly the same circuit design and the layout is pretty similar.  The CS-40M is actually a 2 voice synth so it can play 2 notes at a time and has twice as much voicing circuitry than the 20M does.  This makes it weigh a TON and it is much more difficult to take this to a show than the 20M.  It also has an added ring modulator, the pitch envelope is more complete than that of the CS-20M, and it has 20 memory locations (compared to the 8 on the 20M).
Both the 40M and 20M really sound excellent.

The CS-40M has 2 modes:  Dual or Unison.  In Dual mode, every other note goes to a different voice.  This means that a different set of VCO's, VCF, VCA combination is used.  In Unision mode, all 4 oscillators are stacked on top of each other and it makes a very large sound!  There is no way to set the 2 voices to different sounds, so every knob controls both sounds.  Also, in Unison mode, the only  way to hear just a single oscillator (since the voices are stacked) is to plug a dummy cable into the trigger input for one of the voices and then turn down VCO2. 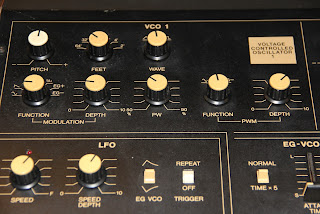 A closer look at the VCO's in the CS-40M:  Like the 20M, each section (VCO1, VCO2, VCF, etc) has its own waveform and amplitude control for modulation.  On the CS-20M, the PWM is always set to a SINE wave, where on the 40M it is selectable.  On the color scheme, you will notice that some knobs and switches are white and some are yellow.  The yellow knobs get written into the memory from which their settings can be recalled where the white controls do not.  It is interesting that on the 20M's VCO, the PWM does not get written to memory but it does on the 40M. 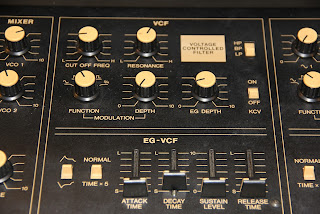 The VCF in the CS-40M is identical to that of the 20M.  See my post for the CS-20M for my thoughts on this filter.  Here is a photo from the 40M, but it is so close in appearance to the 20M that it could be either one.  The KCV switch is the only addition to the 40M, which doesn't work on mine, btw.
On the CS-40M, both VCO1 and VCO2 have an additional volume pot for their SINE wave after the filter section that is found in the VCA section.  This can be used to give an extra emphasis to the fundamental frequency of the sound while using the filter in band pass or high pass mode to add a section of harmonics or color to the sound.
One reason that modifications cannot be as easily done to the CS-40M as they can to the 20M is the fact that there are 2 voices in the 40M.  If I were to connect patch points to the circuitry, I would have to wire jacks to both sets of boards and then use 2 patch cords for every connection that I wanted to make or else I am only affecting half of the sounds.
One complaint that I have about the CS-40M is that the pitch envelope does not get triggered when connecting it to an external sequencer or controller: only the VCF envelope and the VCA envelope get triggered.  Depending on the patch, this means that it can sound different when you play a note on the keyboard or try and use a sequencer with it.  If there was a modification that I was interested in doing to this synthesizer, it would be to connect the pitch envelope to the trigger input as well so this difference would no longer exist.﻿
Posted by Jon Sonnenberg at 4:18 AM