The Yamaha CS-20M is my favorite synth...

I like it so much that it has made its way to countless shows that I have performed, even though it is heavy to lug around and I don't have a good case for it.
So you might ask, "What makes this synthesizer stand out above the other synths?".  I am glad that you asked and I will try to answer this.  The CS-20M has 2 oscillators, 1 VCF, and blah blah  blah...  (you can find the specs on any synth or vintage synth website. )

One of the unique features of the CS-20M (and much of CS series) is that the LFO waveforms are selectable within each section; for instance, VCO 1 can be modulated by a sine LFO, VCO2 by a square LFO, and the VCF by a sample and hold - all going at the same rate. Furthermore, the LFO rate ranges from rather slow to audio.
Another great feature is that there are 8 memory locations to store and recall settings.  This is great for live performances because I usually do about an 8 song set and can easily have a new sound for each song.
The VCF can function as a high pass, band pass, or low pass filter, plus there is an option to mix in the SINE wave from VCO1 after the filter.  So you can have the SINE fundamental and then use a high pass filter or band pass filter to add a section of harmonics on top of the SINE wave.  Many complaints have been made that the filter on these will not oscillate when the resonance is up and that it sounds too smooth.  While it is true the the filter does not go  into self oscillation, it sounds very musical and smooth - I would compare it to a Nord Lead. 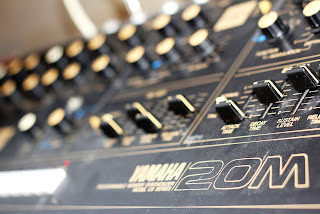 The modifications that I have added were done around 1994 or so.  I tapped into the modulation pots for VCO1, VCF, and VCA, and connected these to a input jack that would normalize the connection back to the stock circuitry when a jack was not connected.  I also tapped the VCO2 output and the noise generator output and put a jack option for an external input into the filter.  This allows me to cross modulate the oscillators, modulate oscillators by noise, modulate the filter or amplifier in different ways, and run external signals through the filter.


I usually have VCO2 modulating the VCF through the jacks that I connected to the circuitry.  This allows for a lot of harsh sounds, especially when the resonance is set pretty high and VCO2 is tuned an octave or a fourth down from VCO1.  Many times when I play live, this patch cord is in place.

Even though the filter does not go into oscillation by itself, you can sort of trick it by sending the headphone output jack into the filter input jack that I added.  This is not exactly the same as a self oscillating filter, but it gives strange ringing sounds that can be really neat and useful.

A few years ago, I had an opportunity to buy the slightly older brother of the CS20M, the CS40M, at a fair price.  I did.  I will create another post in the near future that outlines some of the differences between the two synthesizers.  I prefer the CS-20M, but this is mostly due to the mods which can't be done as easily to the CS-40M.
Posted by Jon Sonnenberg at 8:34 AM