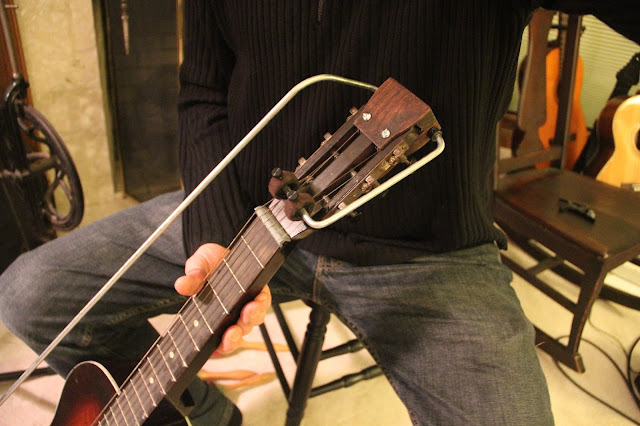 This is a custom bar that I created for my lap steel that is inspired by the levers from a pedal steel. A few things to note:  First of all, this is a non-destructive modification: The 2 bolts that hold the lever to the head go through the space allocated for the tuners, with careful consideration to leave enough room for the tuners to move and tune the strings.  Secondly, there are two bend contacts to the strings and these are adjustable to allow an upward bend on any two strings.  Furthermore, the bend contacts are made of aluminum and covered in a felt so a strong quiet bend is achieved.  The set screw is to keep the bend contacts on the desired strings.

In the past (before this modification), I would usually use an open major chord, where a Major Triad was tuned on the lower 3 strings, then the same triad an octave higher on the upper 3 strings.  This works great if you are playing major chords :).  However, when a minor chord was needed, I would have to carefully not play certain strings to avoid a major third to sound, or I would have to settle for playing a relative major and act like I am playing a minor 7th chord. 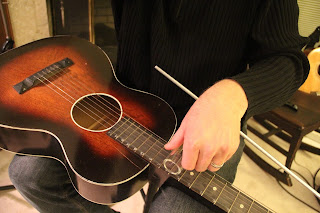 Now I tune the lap steel to a minor chord.  If I stay in minor chords, I leave the bar up (as in the photo on the left).  This does take a level of comfort to work around the bar and get used to sliding the slide over the bar.  I considered putting the bar on the opposite (far) side of the neck, but an equally awkward muscle skill would have to be learned to reach fingers out to bend.  Besides, it really didn't take that long to get used to having a bar under my wrist. 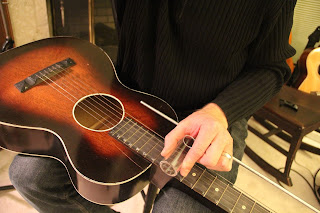 The photo on the right shows how a major chord is played.  By pressing in the bar, it raises the minor thirds (2nd and 4th string in this case).  The bar follows the lap steel in a way that you can move it to the major chord from anywhere along the slide board.  It is also high enough that it won't interfere with the body of the guitar or scratch any part of the guitar.  The bar is made of steel and does not easily bend without a vise and hammer.

I did not use any plans or templates in building this.  I simply followed out the idea in my head, cut the wood and bent the steel until it fit this lap steel that it was intended for.
Posted by Jon Sonnenberg at 12:10 PM