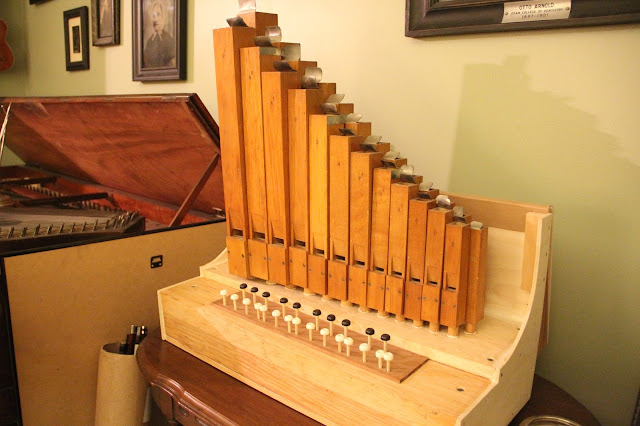 Here is a photo of the portativ organ that I built.  The pipes were salvaged from a large organ and bought on Ebay.  Everything else was made from scratch and figured out along the way.  Originally, I had piano style keys on the keyboard, but the mechanism that I used seemed to bind the keys where they would stick open.  So I ended up just going to a simpler key.  These are simple button keys on a dowel rod that pushes a block out of the way from the pipe so that the pumped air (you can see the bellows on the back right of the instrument in the photo) can move through the pipe.  The instrument was sealed with caulking.  The first 2 times I put it together, there were leaks or problems with the mechanisms or keys.  I finally feel that it is where I would like it to be now.  The wooden pipes give a hollow steamboat sound.  The metal tabs on top of the pipes are for tuning.

I have a second set of metal pipes that I plan to use to build a second portative organ.  I hope to use keys of some sort for that one.  If it is successful, then I may retrofit this one with keys again but for now, it works just fine.

The downside of the buttons is that the dowel that holds them has to be pressed pretty hard and I worry about the dowel breaking if someone tried to play it and put pressure on the button at an angle.  I did see someone build a portative where there was tubing after the key and before the pipe - that method would certainly allow a more flexible key bed layout.  For mine, there is an angled piece that connects the bottom of each button to the lever on the pipe - it was rather cumbersome to make and took a lot of sanding to get things so they would not bind to the surrounding pieces.   The valve that opens and closes has a piece of cork covered in Chapstick to block the passage for air leaks.

Posted by Jon Sonnenberg at 7:16 PM