I recently acquired a working, vintage Roland CPE-800 and VCA-800 from my friend Jacob Graham.  His obsession with early 80's Roland gear had led him down the rabbit hole to this beautiful and interesting piece of gear.  He came across it on EBAY and bought it to add to his Roland studio (which consisted of all Roland gear at the time, nothing newer than 1983).  After a few years of owning it, Jacob found he was not using it much and put it up in a local store NYC music store where no one wanted it, and it sat for another year.  I found out that he was selling it when he told me that the music store asked him to come and pick up this large paper weight that nobody wanted.  I immediately said “Oh – your actually selling that?  I will buy it!!!” 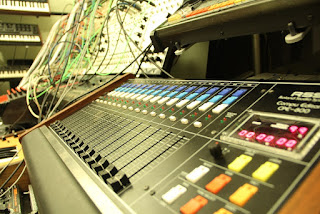 There were very few of these made and hardly any in use today, from what I can tell.  There are not many references to the CPE-800 online.  There are few photos.  Where there is a reference, it is always a vintage ad or someone saying how obsolete this equipment is.  They could not be more wrong.  People have admittedly destroyed these, piecing them out for parts for the Jupiter 8 or TR-808 – which is a shame and tragedy.
This is not a rant about using some obsolete equipment and trying to do things “old school”, somehow believing that you are preserving some piece of history in the process.  Once I had heard about this piece of gear and understood what it does, I was blown away that something like this even exists.  With a modification, I saw a potential to have one of the most versatile, stand-alone modular synthesizer control surfaces ever made.
In many ways, the technology that this product was intended for is indeed obsolete.  When this product was introduced, it was intended to be used for the motion picture industry.  It would sync to SMPTE time code.  It would allow automated volume control over 15 channels for up to 99 hours provided that it would not run out of memory.  Memory usage only occurs when changes occur – in other words, if the levels stay the same, no memory is used for automation.  The original list price was close to $8,000.  Jacob had bought his for a small fraction of that price and relayed the same price to me.

In a conversation with someone who worked at Roland during the time of the release, it originally had a problem with the SMPTE time code where the 1’s and 0’s were reversed and it would not work with other SMPTE products but would work great with itself.  This was fixed in software, but the first impression to the industry had already caused some damage and sales were low.  Roland only had schematics and a user manual for this.  No service manual was ever made for this product.  The user manual mostly talks about using the CPE-800 with the VCA-800, but there is also several references to using it as a lighting control and putting it in“scene” mode. 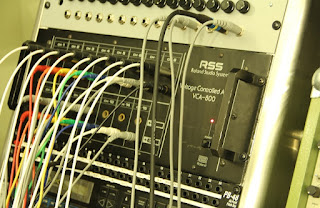 When used in conjunction with the VCA-800, to call this a mixer would be a false statement.  Even though it looks like a mixer, there is no summing amplifier so channels are not combined in any way.  Each channel has a single VCA, with its own input and its own output...     To call this a controller is an understatement. The board unit by itself automates CV’s (control voltages) that span from 0 to 10 volts.  This is much like the Flame knob recorder or the Modcan CV recorder except it has 15 channels instead of 2-4 channels.  Although the CPE only has a fixed timebase (unlike the Modcan and Flame, where there is a variable speed), the length of the recording can be anywhere from less than a second to 99 hours!  This can also be looped, paused, or restarted...


These voltages go into the VCA-800  box (shown in the photo above) to control the amplitude/volume.  You can use the faders manually (and they are high quality 100mm faders!), or you can record or playback the changes that you make over time.  The faders are not motorized, but there is a nice pair of LED’s that show if the memory value is higher or lower than where you have the channel set. With a modification that I did, this is an amazing CV controller, can be used with ANY modular equipment, and blows away most modern controllers that are being made today.  15 channels can be used as level controls or voltages, or both, to send signals anywhere in your modular patch.  My modification is shown in the photo - it is the grey rack on top of the VCA-800, with a row of 15 attenuators and a row of 15 CV output jacks.

On a technical note, the VCA’s are DC blocked so the lowest frequency that they pass is around 15 Hz.  This cannot pass LFO’s to other modules through the VCA-800, but you can use the voltage outputs that I added to control VCA’s that are not DC blocked and can pass LFO’s or other CV signals.  I added attenuators to each of the 15 voltage outputs so I can scale them down to work with various modules.  I also added another modification where I can start and stop this with a gate signal from an analog synthesizer – so it can be used as a 99 hour, 15 channel, arbitrary envelope generator. 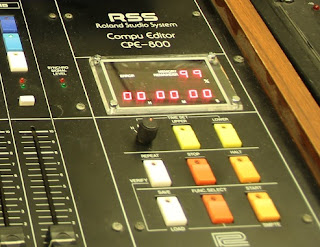 I would love to buy more of these, add my modification, then sell these as a control voltage source or offer a modification box as a service.  The problem is to find another.  Contact me if you have one of these that you wish to sell.


Video examples of this unit in action will be posted soon.  I just need to edit some footage together.
Posted by Jon Sonnenberg at 2:20 PM