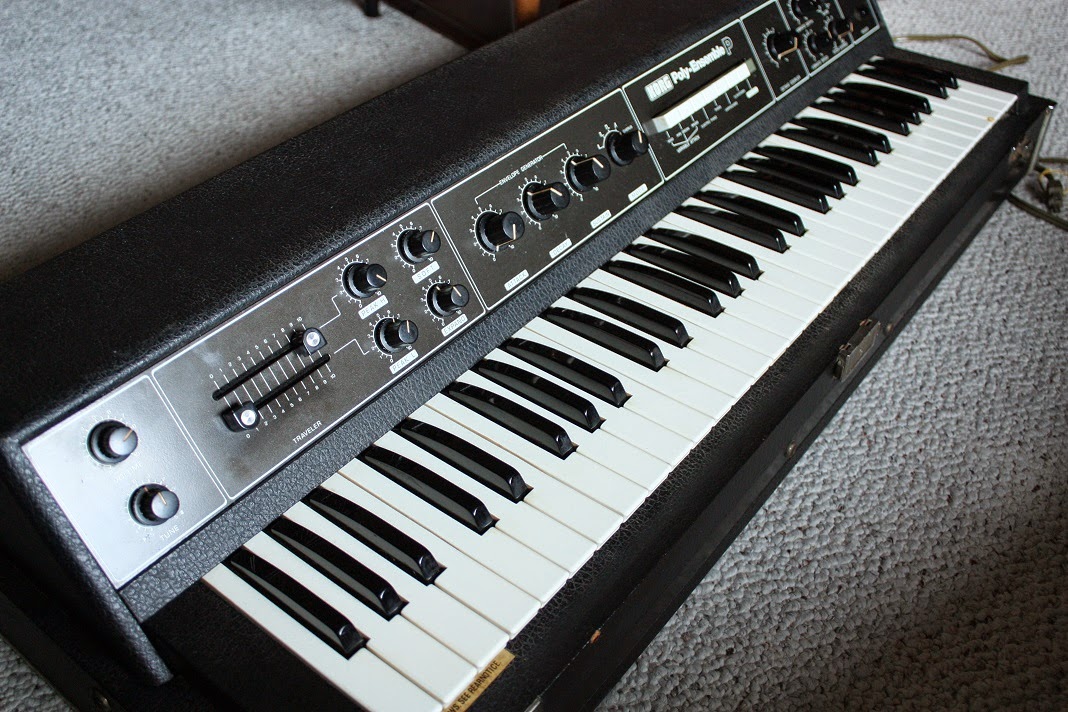 So the Korg PE1000 is not just a simple string machine.  There are several unique features that make this machine stand out above the other synthesizers out there.  Most of this is due to the fact that every single key has its own oscillator.  There is no divide down circuitry.  There are no top octave dividers.  Most of the other string synths (Korg PE2000, Polymoog, Korg Lambda, Roland RS09, Arp Solina, etc, etc) use these dividers to generate all the notes of the octave from one single oscillator.  In some cases, like the Korg PE2000 or Korg Lambda, there are 3 master oscillators that all the other notes are divided down from so each note can generate the equivalent of a 3 oscillator synth - which sounds very rich with chorus even without the chorus effect on.
But back to the PE1000...
Something that is not obvious from photos of this instrument or many descriptions is that there is a panel below the keyboard that can be removed which reveals a trim pot for the pitch of every note.  You can tune these oscillators so they are slightly out of tune with the scale.  But even without doing this detune, there are plenty of interesting options that Korg piled into this instrument.
For one thing, the LFO or vibrato circuit is very interesting.  There are actually 3 separate LFO's (Low Frequency Oscillators) that are controlled by one knob.  These 3 oscillators affect the pitches of different notes across the keyboard.  You can't control which LFO's go where, but Korg arranged this in such a way that when you play a chord or octave, the LFO's affecting each note are likely to be different and therefore the sound is huge and lush. In contrast with most analog synths, when you have a fixed number of oscillators with a single LFO affecting them together, any chord played will rise and fall in the same exact proportion.  With the PE1000, some notes will be rising while others falling or peaking, etc.
﻿ 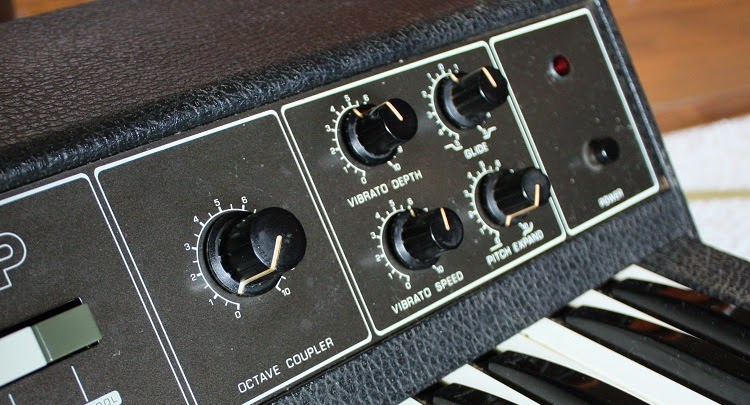 Another thing that makes the PE1000 unique is the Pitch Expand control.  This adjusts the pitch across the entire 5 octave keyboard so that if you play an octave, it is slightly higher in pitch than it should be.  If this is adjusted so it slightly affects the sound, then it can bring the keys so slightly out of tune that it sounds interesting when playing chords across the keyboard.  Furthermore, if you increase the value of the Octave Coupler knob, it will  add the volume of the oscillator one octave above to the key that is being depressed.  So if you use a combination of LFO, Pitch Expand, and Octave Coupler, each note plays 2 oscillators (one octave apart), likely having a separate phase of LFO affecting its rise and fall differently, and detuned depending on the amount of Pitch Expand.  Note that the Octave Coupler does not affect the highest octave of this instrument because there aren't higher oscillators to add to the keys.
Another thing that is pretty neat, but subtle, is that divider circuits tend to output pulse waves only.  The PE1000 has a saw wave available from every key.  The saw waveform is one of the most harmonically rich waveforms of traditional analog waveforms.  So when you filter the sound, there is a waveform with lots of harmonics to take out via the filter.
The filter (or traveler, as they call it) is a series Low Pass/High Pass filter like that found on a Korg 700/700s/800dv.  Each of these have an individual Peak/Resonance control which leads to many tonal possibilities.  Unfortunately, there are no modulation capabilities except for a subtle envelope control on the High Pass filter only, or an expression pedal input again only affecting the High Pass part of this filter.
Although this instrument sounds amazing and is packed with numerous features, there are 3 things that I would change (or perhaps modify at some point if I get around to it):
1) While the sustain/release time are comprehensively long and it can slowly decay the note long after the key is released, the attack time has much to be desired.  It does not increase slow enough, there is a slight delay before the rise on the "longest" setting, and sometimes a slightly audible thud can be heard before the attack rise.
2) There is a chorus waveform which is kind of a PWM (pulse width modulated signal), but unfortunately, the modulation rate of this waveform is fixed by an internal oscillator without any external control of the speed.  I would much like a control over this in order to alter the rate from a slow morphing waveform to a fast, thick, modulated signal.
3) Many of the controls are limited and do not affect the presets.  Preset modes like "harpsichord" or "electric piano" only allow a few of the knobs to alter the sound. Only in the "control" preset do ALL the knobs come to life.  I think that this is because most of the presets can be made with the total control of all parameter knobs.  In other words, I don't believe that there are any special circuits or extra filtering that the preset sounds go through in order to make them.  There are a few presets that I wish that they would have at least given the operator control over the peak/resonance of the filter, but because it in part creates the tone of the preset, they don't allow control over these parameters.
Posted by Jon Sonnenberg at 9:12 AM