Mixing outside of your computer

In this day and age, many people mix their songs strictly inside of the computer and often do not have a need for larger mixing boards.  Fortunately for people like me who want to have many channels available (for a variety of reasons that I will get into in a minute), the price of large mixers on the used market is more affordable than ever and one can usually find some amazing deals.
There are several reasons that a mixer of at least 24 channels comes in handy in the recording studio – even if the majority of your work is done inside of the computer.

For one, equipment that often gets used can be “hardwired” to a channel and used or turned on at any given time or when needed.  I have many instruments and microphones set up this way.  It makes the recording process quick and painless.  If used this way, the channel gain, EQ, and levels for recording can be set where there is no need to tune things in or tweak any of the settings.   A good example of this would be for the drums around a drum kit.  If you have various microphones around a drum kit (kick, snare, overheads, etc), you can leave them set up on a group of channels on the mixer and not have to worry about the pain of moving the mics around.  This, of course, also assumes that you have a drum kit set up in the corner of your studio.  Many of the larger boards have decent pre-amps and quiet EQ’s so it is convenient to set up a channel for a particular mic or machine and leave it be.
Another reason to have a large mixer is to be able to submix a group of instruments together before they go into your computer interface.  This is easiest if your mixer offers a “bus” section where there might be additional outputs that are assignable per channel.  This is especially handy if you want to group sounds together and keep them on the same track. 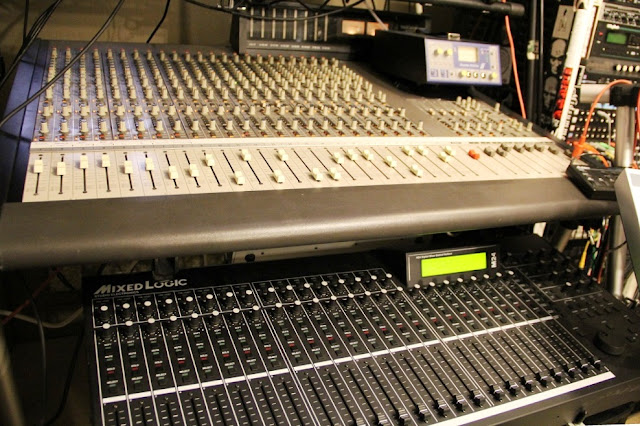 The mixer that I use is a Tascam M3500.  There are 2 versions of this; a 24 channel version and a 32 channel version.   I have the 24 channel version.  (Actually, each channel strip has a large and small fader, which really makes these mixers 48 or 64 input, depending on how many channels are on the mixer).  The photo above shows the M3500 on top and my Mixed Logic USB controller on the bottom (the USB controller processes no audio but has motorized faders to jump to any Protools project that I open up).  On the M3500, I always have the first 9 channels dedicated to various microphones around the studio (drums: kick, snare, 2 overheads, my pair of matched microphones, and a few other microphones that can be set up around the studio for different applications).  Channels 10 through 19 are wired to various outputs of drum machines and modular gear on the left side of the studio.  Channels 20 through 24 are wired to whatever I connect from the right side of the studio (usually samplers or the Wurlitzer piano or various string machines).  The small faders are for playback devices – like tape decks, CD players, the computer output, etc. 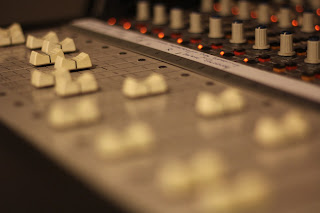 One final reason to use a mixer, is to actually mix!; to do mixing outside of the computer.  If your interface has multiple outputs, you can route each one to a different channel and then mix, blend, fade, and adjust them back into a single or stereo set of inputs in your computer.  (when doing this, make sure that you don’t create a feedback loop by mixing the computer output back into the input).  For this type of use, the way the faders feel on the mixer is critical.  I am very much a sucker for smooth faders.  The faders on the M3500 float like a knife through softened butter.
Posted by Jon Sonnenberg at 2:16 PM