﻿For many years, I had the opinion that the Roland TR-808 was overpriced, over-sampled, and over used.  I felt that my modified TR-606 was a nice substitute and could easily make similar sounds and if I needed exact sounds, there are plenty of samples available for nearly every sampler, softsynth, drum machine, etc…  So why would I buy one?

Originally, I bought one because I like the “TR” style programming and I needed more trigger outputs for modular synthesizers.  When I bought it, there were not a lot of other machines available with more than 1 or 2 triggers and the 2 triggers out of my TR-606 just was not enough for the types of sequencing and triggering I wanted to do. The TR-808 has 3 separate trigger outs, plus individual outputs for each sound, so every sound is able to be processed separately (so you could run the individual outputs through envelope followers and gate extractors for more triggers). Before I got this, I was very close to getting a Simmons drum sequencer (which would have given me 8 trigger outputs), but that deal fell through and I was left getting the 808.  I honestly did not think that I would be using any of the internal, overused sounds at all.  I was wrong. 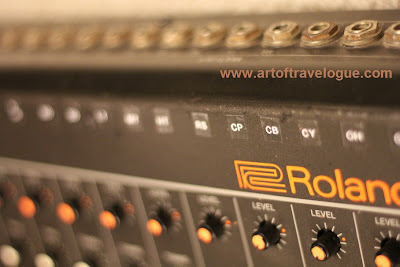 Before I ever owned one, let me say that I had already understood that each sound had adjustments that could be made and had individual outputs (which I think is one of the things that make this and the TR909 so popular and expensive 30 years later).  Furthermore, I had played with programs like Rebirth which simulates many of the sounds from the TR-808, TR-909, and TB-303.
Kick:  The first thing that I noticed, however, when I got the 808, was how short the kick drum can become.  So many samples have the kick long and boomy, I actually find the kick most useful as a short thuddy click.   It is tighter and deeper than most samples that I have heard of the "short" 808 kick.  Another nice surprise is that when the decay of the kick is long and the kick is played multiple times, each repetition sounds slightly different and the way the kick retriggers out of the long decay is not captured with any sample that I have heard.
Snare and Clap:  the snare and claps sound fairly predictable, considering how many times we hear these sounds in pop music.  They really become unique when compressed, distorted, filtered, etc.  Because these are from analog circuits, a heavy compressor can bring out the randomness of the noise source behind the sound and make some really interesting new snares.
Clave and Cowbell:  My favorite sound is the Clave – it sounds like an actual wood clave to me.  My least favorite sound is the Cowbell – it doesn’t matter how you process it, the perfect 5th interval of the cowbell sound is completely unusable to me and is almost laughable when I hear attempts to use it in a song.
Toms, Cymbals, Hi Hats:  These sounds are used so often in all kinds of music and are distinct and recognizable.  I think that one of the reasons for their popularity is tone and quality of the sounds are not overtly flashy, but fit in nicely: the toms are just simple tones and can be tuned; the cymbals are aggressive enough to signify an accent; the hi hats are short and bright enough to carry the pattern without being distracting. 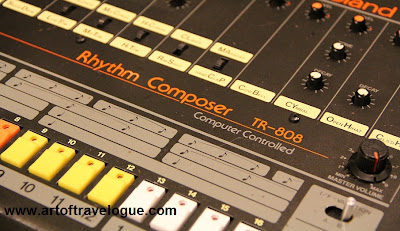 Because of the flexibility and quality of the sounds, the TR-808 to me is as much of a musical instrument as it is a drum machine.
Posted by Jon Sonnenberg at 7:25 AM