The Archangel Sequencer from Detachment 3 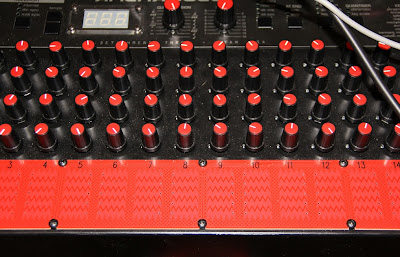 With the popularity of capacitive touch sensors (we find these sensors underneath and behind many modern devices- like many of the current Apple products or anything with a touch sensitive screen), there are new products being released that incoporate this technology into the electronic music world.


Capacitive touch technology is not a new phenomenon, nor is it a new concept in electronic music. Several keyboards, most notably ones manufactured by Serge and by Buchla, were based on this concept and available in the 1970's.  What is different about many of the modern designs is that the sensor interface is contained within a single IC and will interface directly to a microprocessor.  This architecture has advantages to the early designs because the sensors are more accurate, consistant, and easier to fine tune. 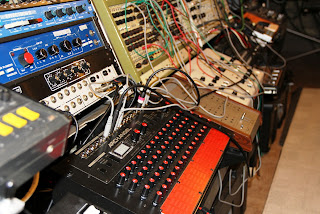 The Archangel from Detachment 3 is a modern capacitive touchplate keyboard with some flexible and innovative ideas.  For one, each of the 16 pads respond to surface area (which they call "pressure" in keeping consistent with Serge touch plate interfaces from the past), but also responds to position from the front of the plate/key to the back of the plate/key. Another great feature of the Archangel is that it has a built in quantizer (spelled with the alternate spelling quantiser).  The quantizer has numorous scale options so that each key can be calibrated to play these scales.

The Archangel is also a powerful analog sequencer of 4 rows, 16 stages and has the ability to allow the keyboard to transpose/modulate (in music theory terms rather electronic music terms) the sequence to different keys, within or outside of the scale - depending on the mode.  In fact, you can use the keyboard to play the sequencer in a number of useful and creative ways.
Posted by Jon Sonnenberg at 3:06 PM