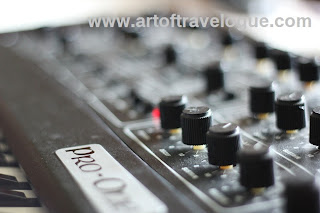 I remember being at a show once where the band that was performing only used a Sequential Circuits Drumtraks and a Sequential Circuits Pro One for their live show - that was it!  I was amazed how full the live sound was and how well the external input of the Pro One could clock the sequencer and the arpeggio so well.  It made me an instant believer in the Pro One as an unbelievably versatile monophonic synth.

The Pro One is a monophonic synthesizer (one voice/note at a time) which is very similar in voice architecture to its big polyphonic brothers, the Prophet-5 and the Prophet-10 (in fact, the user manual claims that these have the SAME voice architecture).  But where the Pro One lacks in polyphony, it makes up in featuring a very useable external input connection where you can process other sounds through the filter and amplifier.
Don't get me wrong - many other monophonic synthesizers (Arp Axxe, MiniMoog, Roland SH-09, etc, etc) also feature this external input.  The difference is that the Pro One decided to add gate detection circuitry which triggers the envelope generators and advances the sequencer or arpeggio if an instrument is connected to the external input.  This input is sensative enough to detect low level signals like microphones or guitars, and line level signals, like drum machines or other synthesizers.  This has a great advantage over a simple external input, even though some of the above mentioned synths also have an envelope follower (followers, however, are usually quite slow to respond and is not as useful as a gate detector). 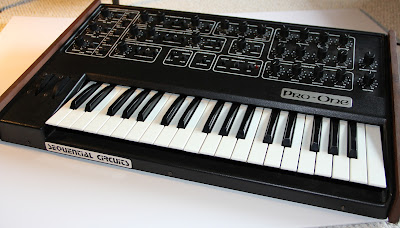 I don't know that this synthesizer takes the place of my all time favorite mono synth, the Yamaha CS-20M, but it comes in a close second.  The voice architecture is classic 2VCO-VCF-VCA, with separate envelopes for the filter and amplifier and a dedicated LFO which also controls the arpeggio/sequencer speed.  One unique thing about the LFO is that you can mix the modulation waveforms by putting multiple waves on at the same time - in other words, modulate a source using both a sawtooth wave and a triangle wave at the same time.  Most non-modular synths will only let you select one waveform at a time.
Another point to note about the Pro One is its extensive modulation routing system.  I always wondered why there weren't more synthesizers that let you modulate its filter using one of the VCO's, allow various amounts of modulation from one VCO to another, or self modulate a VCO into the same VCO.  The Pro One allows these things and more.

The one complaint that I have has to do with the construction.  I have heard many people complain about how it feels cheap and not very well put together.  This is mostly because the pots (shafts that all the knobs are attached to) are not attached to the front panel - which you can see in the first photo of this post.  This does 2 things - it makes the knobs feel a bit wiggly and not very solid AND it also makes it easy to crack solder joints on the circuit board because the only thing that holds the pot in place are the solder connections.  ﻿
Posted by Jon Sonnenberg at 7:17 PM