I just got this mixer in the mail.  I know that most of you will probably wonder why I would devote a blog entry to something as simple as a mixer, but this isn't just any old mixer.  This mixer has many unique features that make it very useable in my modular system.   This mixer is designed as a 5 in X 1 out mixer.  Even though the output is always a sum of the 5 inputs, there are various options for the output jack; One positively phased output, one negatively phased output, and an attenuated output that can be adjusted for either phase (sometimes called an attenuverter or polarized attenuator).  Also, input 4 is normalized to a positive DC voltage and input 5 to a negative DC voltage.  This mixer is capable of mixing both audio signals and control voltages.  These offsets can be very useful when trying to condition the signals for use with other modules where phase, level and offset are critical.  One example of a useful DC offset: if you had an LFO modulating the pitch of an oscillator (vibrato effect), but you wanted the vibrato at or above the pitch of your melody, rather than a little above or a little below.  Another example of a useful DC offset is if you want an envelope to control something and have it swing into negative voltages, but you do not wish to invert the ADSR shape.  An example where phase or inversion is critical is when you have saw wave and the slope is decending, but you would like it to be ascending.

In addition to this, the circuitry is transistor-based, rather than op-amp based and each channel can be overdriven for a fuzz effect or mild distortion.  This creates a very musical distortion and is pleasant to listen to.  It is especially nice to send sine waves into this mixer, then let the distortion add harmonics to the peaks of the beating waveform where the troughs are distortion free.   Since the clip happens at a specific DC level, the DC offsets have another dimension to their usefulness:  they can essentially control the amount of clipping or distortion. 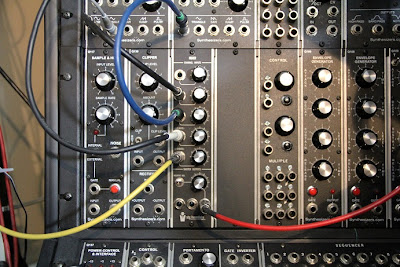 I met Eric (aka Suit and Tie Guy or STG) recently through my friend Andrew Horton.  I had known about STG for quite a while and moreso, I had preordered the Archangel sequencer from Detachment 3 (STG's sister company).  I find Eric to be a very approachable person and quite knowledgeable on various modular systems and individual modules.  More information on this module and other STG modules can be found at www.stgsoundlabs.com
Posted by Jon Sonnenberg at 12:30 PM