I got a call the other day from a friend who had an old Korg sampler to which he replaced the floppy drive with some other device that is being made to "update" storage devices to things like SD cards or equivalent. On the phone, he acted like the floppy was the most archaic storage device to trouble with. I politely told him, "At least you don't have to deal with EPROMs". 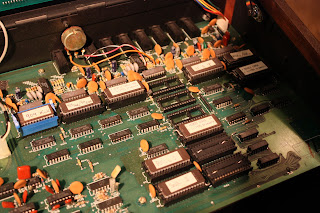 This picture is the inside to a Sequential Circuit Drumtraks.  I originally bought this from Claude S. of the band Anything Box around 1993 or so. I bought it with 26 extra EPROM sounds of different percussion, snares, kicks, and toms.  In 1996, I was friends with Alex and Stuart of the band Bassland.  They had access to an Oberheim Prommer, where you could record/sample sound directly into the machine and burn it on an EPROM in the correct format for different drum machines.  I burned another 20 EPROMS or so with various drum loops, typewriter sounds, 909 kick, 909 snare, 909 claps, and a number of synth clicks, noise, and laser sounds.
Posted by Jon Sonnenberg at 7:27 PM