The Roland Jupiter-8, or JP-8 is probably one of the most recognizable synthesizers of all time, with the rainbow buttons and the large acrylic cover over the display.  For its time, it was one of the most reliable, most toured with, polyphonic synthesizers.  I won’t bother to list the bands that used this – that is found on numerous other websites.  I won’t say what type of features or how many oscillators, etc it has – that is found on other sites as well.


I will write about why I like mine and what makes it so special and worth keeping around!


I was incredibly fortunate – I bought my Jupiter-8 in 1989, when analog prices had fallen and you could find used synthesizers on a college budget.

Before I ever bought one, I knew what it was, what it looked like, I knew what controls it had - I had a Roland catalog from the early 80's that showed and told all; I had the Howard Jones 12" single for 'New Song' (which shows the JP-8), but I didn't truely know... At the time, I had a lot of misconceptions... At the time, I thought that it was an extension of the Juno-60, which I had owned for 5 years prior to my purchase of the JP-8.  It was the first time I had ever used a synthesizer that had more than one envelope generator.  I remember thinking that I thought ‘one MUST be for the lower sound and the other MUST be for the upper sound’.  Obviously, I was wrong about this and many other ideas that I had about the JP-8.

When it was brought over, we connected it and turned it on.  Instantly, I realized how powerful this synthesizer actually is.


There are several things that stand out about the Jupiter-8 (and 6, for that matter)


-          The pulse width (PW) and pulse width modulation (PWM) sound better on this synthesizer than any other synth that I have used.  I am not sure why – it seems like it would not be a thing to make a big deal about, but it really does sound incredible – perhaps it is the way the 2 oscillators are mixed together and having both of them set to PWM waveforms – just sounds super.


-          There is cross modulation for modulating VCO 2 into VCO1 and has an amount capable of a very wide range (rather than on many hard-wired synths with cross modulation where you just have an on/off).  You can tune this so that the modulation index is harmonically related, making a new tonally rich waveform that is quite musical. 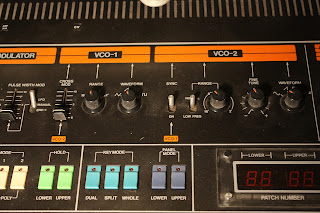 
-          There is an output for highest note CV and Gate, so I can use the 5 octave keyboard with any mono synth or modular device.


One of the things that I like to do with mine, is sequence a line using the MSQ, then turn on the arpeggio and either leave its tempo free floating, sync it to a clock that is in time, or clock it with the gate out of the JP-8 highest note output...  When it is free floating, it can create bursts of interesting, sparkling sounds that shimmer above the mix, if you clock it with the gate, and have 2octave/random selected, then you can have your sequence randomly jump up an octave half the time and add more life to your sequence (there are ways to do this with modular patches as well - see my post on randomness and probability for details).  Another thing that you can do when using the gate signal as an arpeggio clock:  if you sequence a bunch of monophonic notes, then a chord for one of the steps, in arpeggio mode set to 1 octave/random, it will randomly select one of the notes from the chord when the sequence gets to that step! - it is a good way to create an element of chance in a sequence, but limit the possibilities to a few notes. 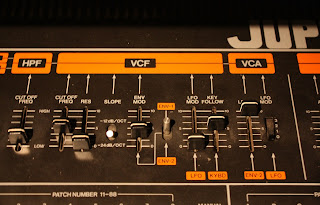 One thing that I don't like about the Jupiter 8, or the Juno series too for this matter, is that they put a variable (but not contour voltage controlled) high pass filter in series with the lowpass filter.  In some ways this is nice, to be able to make the sound thinner, but even at its lowest setting, I feel that I don't get enough low end out of these synthesizers.  Don't get me wrong, I can program a bass sound on a Jupiter-8 that sounds decent, but if I program it on something like the SH-101, which doesn't have a series high pass, it sounds deeper.
Posted by Jon Sonnenberg at 3:46 AM